Spencer fighting to be fit 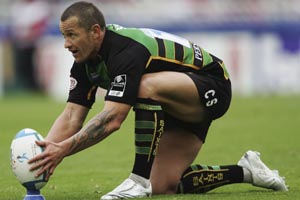 The All Blacks legend is rated ’70-30 against’ by coach Paul Grayson to make the game at the Ricoh Arena in Coventry, but vowed to give his outside half all the time he needs to try to make the team.

“We’re held together by bits of string and sticking plaster at the moment and there are a number of injury worries to overcome before the weekend,” said Grayson, a Heineken Cup winner with Saints in 2000.

“Our skipper Bruce Reihana isn’t 100%, it’s probably 70-30 against Carlos making the game because of the injury he picked up at London Wasps last weekend and we need to get Robbie Kydd and Damian Browne through fitness tests as well.

“But make no mistake, we will be going all out to win this game. We may have surprised a few people by reaching the semi-finals, but we are here by right and we intend to make the most of our opportunity.

“There are only 22 Saints players who have reached the last four of a major European Cup competition before so this is something new and very exciting for the players.”

Grayson still has relegation issues to address in the Guinness Premiership the following week, but insists there is only one focus at the club – reaching the Heineken Cup final at Twickenham Stadium.

“Our performances over the last few months have got better and we are a difficult side to beat. We proved what is possible by beating Biarritz Olympique in San Sebastian in the quarter-finals and we owe it to our fans to give this our best shot,” said Grayson.

“This group of players is very tight and very focussed. They know there is a big prize at the end of this game and they are determined to do everything they can to get their hands on it.”