A case of try try and try again 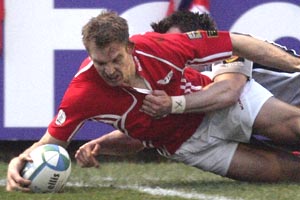 Dafydd James is out on his own when it comes to scoring tries in the Heineken Cup – and he is hoping it turns out to be third time lucky as Llanelli Scarlets try to break their tournament semi-final duck.

The Welsh region have twice fallen at the semi-final stage and they go into Saturday’s showdown at the Walkers Stadium against former double winners Leicester Tigers with the tournament’s leading try scorer determined to help the Scarlets reach a first final.

“It is a massive match,” said the Wales threequarter who is the only player to receive an ERC Elite Award for scoring 25 Heineken Cup tries and has now hoisted that tally to 28.

“It is the crucial part of the competition where you get no second chances, it is winner takes all, but if you want to win the title you have to beat the best in getting there.

“We beat Munster, the defending champions, in the quarters and now we have to go one step further against a side who have a great European pedigree, who have appeared in three finals and have won the Heineken Cup twice.

“It is a must win match for both sides and it should be a great game – I hope the thousands of our fans have plenty to cheer about.”
Those two semi-final heartbreaks came against Northampton Saints in 2000 and the Tigers in 2002 – both English clubs going on to claim the silverware in the final.

“I played in that semi-final against Northampton in Reading and it was a silly penalty that allowed Paul Grayson to step up and slot the goal – I knew he was never going to miss it,” said James, who 28 tries have come in 57 Heineken Cup appearances for a strike rate of a fraction short of a try every two matches.

“With the Leicester game that does mean we hope it is third time lucky for us but we don’t dwell on the past, it is all about the present.

“The whole region is really buzzing about the match – it is virtually the only thing anyone is talking about – and the bottom line is that it is 15 against 15 and I just hope that it ends up as a red letter day.

“I have played at Welford Road a couple of times but obviously never at the Walkers. However, as it is the ground for a leading football side I know the pitch will be excellent.”

The Scarlets are the only one of the semi-final sides to have reached this stage with straight wins and James believes that their perfect seven from seven can provide the confidence to go one better.

“Our primary objective was just to qualify for the knock-out stages,” he said. “We knew we would have a couple of tough games against Toulouse in particular and that it was always going to be difficult to win over there, but we built up some momentum and snatched that vital away win.

“It has helped the confidence of the squad but we are staying realistic and keeping our feet well and truly on the ground because now we are up against one of the best teams in Europe and they are most certainly not going to roll over.

“We are totally focused and determined to go there and win but we also accept that they have huge strengths and international players in abundance. They have two big wings, great ball carriers, some older heads in Corry and Moody plus cheeky chappie Ellis.

“If we want to go all the way we will have to raise our game 10-fold.”