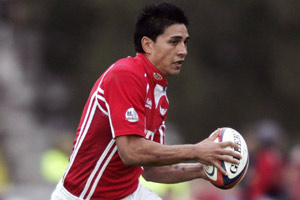 Former New Zealand star Daryl Gibson is doubly disappointed Regan King is wearing the Scarlet shirt in the Heineken Cup rather than a black one preparing for the World Cup.

For Gibson believes his fellow Kiwi is in such good form he would be the answer to the All Blacks prayers in the problem centre position following the retirement of Tana Umaga.

.. And of course if King was still in New Zealand then he would not be in the Scarlets team looking to beat Leicester to stop them getting through to the final of the Heineken Cup.

“I am a Regan King fan, he is a fantastic player and by all accounts he has played particularly well last year and this,” said Tigers vice-captain Gibson, capped 19 times by the All Blacks.

“He is obviously the danger man out wide for Llanelli so if we can keep him quiet we are half way there.”

Gibson is looking forward to the semi-final and a chance to build on victories over Stade Francais and Munster in the competition.

“Up until those two games we had not been playing particularly well and the Heineken Cup is a step up from the Premiership or the EDF so you have to play your ‘A’ game to even get close to progressing in this tournament.

“Fortunately on those two days we played the type of rugby we are proud to play, but Llanelli are just as tough.

“Their record in Europe is very good. They beat Toulouse in Toulouse which is a record in itself, so it is perhaps shaping up as the clash of the semis.”

The Scarlets have been in two previous semi-finals and lost both to late kicks, while Leicester have played at the Walkers Stadium twice before and lost both times, so it will be third time lucky for one of the two sides.

“It would be nice to get that voodoo off our back. I enjoy playing there but unfortunately we have not won there and the fans are acutely aware of that,” said Gibson.

“The fans do not particularly like going there but for various reasons we do.”

This match has been billed as the Leicester pack against the Scarlets backs, but Gibson believes that is unfair on the Leicester backs who have done so much to see his side through to the semi-finals.

“As  a back line I think we are very underrated. If you look at tries on the board for Leicester this season then most of them have come from the backs,” he said.

“Historically Leicester have always had a strong pack, but if you want to progress in this competition then you have to be strong across the board.”