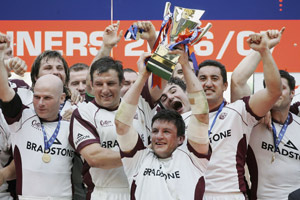 It’s one down and two to go for Leicester Tigers in their quest for cup treble after they staved off a spirited Ospreys comeback at Twickenham Stadium to end a five year wait for a major title by taking the EDF Energy Cup at the weekend.

But their 41-35 win left them with a few problems ahead of Saturday’s Heineken Cup semi-final showdown with Llanelli Scarlets at the Walkers Stadium as Italian prop Martin Castrogiovanni and Irish outside half Paul Burke picked up injuries.


The biggest concern is over Castrogiovanni, who damaged his knee and was walking around the field with crutches at the presentation ceremony.

Tigers’ director of rugby Pat Howard, who is already without Martin Ayerza through suspension, is set to give his front row man 48 hours before assessing the lasting damage.

“This victory was testimony to the whole squad who have got us to where we are. We’ve set ourselves the target of winning all three trophies (EDF, Heineken Cup and Guinness Premiership) and, while it is not easy, I’m totally confident my players can do it,” said Howard.

“We have to put this final to one side now and start to focus on the Heineken Cup clash with the Scarlets. It’s a very tough turn-around, but winning this cup will give everyone a huge lift.”