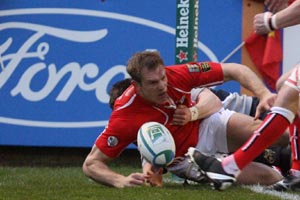 Heineken Cup fever has gripped West Wales and even spread as far as Ireland as demand for their semi-final in Leicester has been greater than they have ever known. - 12/04/2007 17:20

Heineken Cup fever has gripped West Wales and even spread as far as Ireland as demand for their semi-final in Leicester has been greater than they have ever known.

Stuart Gallacher has been chief executive at Stradey Park for 11 seasons and he says he has never known anything quite like the level of interest that there is in this crunch clash.

“For this particular game I have to say the interest is at it’s greatest, no-one in our office has ever experienced anything like this either and they have been with me a long time,” he said.

“We have had telephone calls from all over, we have even had calls from Munster with people wanting to buy a ticket and coming to support the Scarlets which is great.”

Of course the Scarlets beat Munster 24-15 in the quarter-finals, but the Welsh team are in the semis with three English clubs.

“We were allocated 14,000. When we put the tickets on sale it was the biggest day we have ever had since I have been here in regards to interest – queues from 6.30 in the morning to 6.30 at night,” said Gallacher.

“We sold 6,000 tickets in the one day. We have what we think is an imaginative marketing policy that if you buy a ticket here you can go by coach for £5 return.

“We have sent a letter to the 74 clubs in our region saying that if they buy 50 tickets from us they can have a bus free of charge apart from the £5 each, so it’s a good deal for everyone and I have to say the response has been remarkable.

“I am hoping we can sell all our allocation. We took around 12-13,000 to Nottingham the last time we were in the semi-final and this is a good tie on a Saturday afternoon. I am hoping we will have a great support on the day.

“The coach travel worked last time and hopefully it will work again.”

This will be the third time the Scarlets have reached the semi-final of Europe’s top club competition and the second time they will have faced Leicester at this stage.

“My only regret is that this is our third semi-final and we hvae yet to have one in the Principality, but that’s the draw and we have to go up there,” said Gallacher.

“I hope we can go one further, we have played very well in the whole of the Heineken Cup, in all seven games we have been right up there in terms of form. We will go up there and play so it should be a cracking game.

“We are realistic, they are a good side but so are we. I think there is a respect for us now in this tournament which maybe was not there at the beginning, if you listen to the former players and the pundits.

“I think it is the way we play that we were able to tough it out in Ulster in difficult conditions, beat Toulouse with rugby and then hit London Irish before they knew where they were. Then the quarter-final here was full on up front and we were able to come out on top.

“We always fancy ourselves of going a long way in the Heineken Cup and the fans do as well. Everyone in the office says they have never known anything like this.

“I think the interesting thing is that we have a lotof a younger audience, they’re not all grey-haired like me, there are a lot of families involved and for this particular game the interest is at its greatest.”