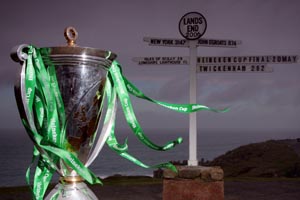 Only eight teams are left on the road to Twickenham

Tickets for the must win Wasps v Saints semi-final are now on public sale.

Tickets for the Heineken Cup semi-final clash of the two former champions London Wasps and Northampton Saints at the Ricoh Arena, Coventry are now on public sale through both Clubs.


The 32,000 Ricoh Arena will be a new venue for the Heineken Cup and a bumper crowd is anticipated for the must win game which will decide who will make it through to the 12th Heineken Cup semi-final, which will be played at the Twickenham Stadium on Sunday, 20 May.

Tickets went on sale to season ticket holders last week and are now available to the general public through the ticket offices and ticket hotlines of both Clubs until Friday 13 April.  Tickets are priced at £45, £35 and £25 (with concessions for under-16s at £13).  Handling fees may apply.

Tickets are available through:

Tickets can be purchased in person at Franklin’s Gardens or call the Ticket Hotline on:

There are currently no restrictions on the number of tickets supporters can buy.