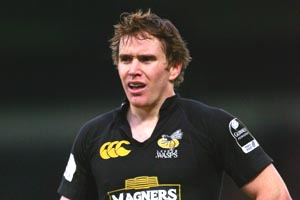 Wasps are full of confidence after the way they saw off Leinster in the Heineken Cup quarter-finals, according to two-try hero Eoin Reddan.

The Ireland scrum half is now looking forward to a clash against Guinness Premiership rivals Northampton who shocked many with their win against Biarritz.

..  He dismisses the idea that a trip to Coventry’s Ricoh Arena will be a simpler task than facing the French champions in San Sebastian, commenting, “If Northampton got through that then they must be a big threat.

“We are very very happy with a massive semi-final coming up now so it is all good.

“Playing for a club like Wasps you want to be playing big games at some stage and now it is happening.

“There is a confidence in the squad as a group of players but I mean we would not be confident about winning anything as yet – it is just a simple confidence which helps us when we train and when we play and that is as far as it goes.”

The former Munster and Connacht scrum half scored a try in each half for Wasps as they beat Leinster 35-13.