Scarlets are the form team – Howard 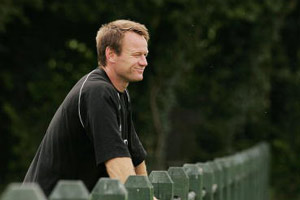 Leicester Tigers qualified for one Twickenham final last weekend - and coach Pat Howard immediately set his sights on raising the bar to reach another. - 27/03/2007 12:04

Leicester Tigers coach Pat Howard looked forward to his side’s semi-final date with Llanelli Scarlets and declared the Welsh region have been the top team of this year’s Heineken Cup.

“I think they have been the form side in the European cup so far,” said Howard, after his side earned a semi-final place.

“The Scarlets won six out six in a very difficult pool, we know that and are looking forward to it, we know we will have to produce an even better performance to win against them.”

Leicester’s 21-20 victory over Stade Francais has set them up with a home semi-final at the Walkers Stadium football ground.

“It was difficult against Stade, I thought we were lucky to win but if we had lost we would have been unlucky. The game was very close but if either of those drop goals had gone over we would have lost,” said Howard.

“A little bit of luck but we scored two tries to one and had more opportunities to score tries. We are a side that are playing well but we have more challenges to come.

“I was over the moon we played reasonably well against Stade Francais, we were not perfect by any means but let us take that performance and build on it.

“Consistency is not rewarded in this competition it is about turning out for the big days and you have got to perform on those big days.”