Corry relieved as Tigers sneak through 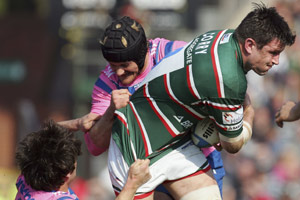 Leicester will play their fifth Heineken Cup semi-final against the Llanelli Scarlets in three weeks after a nail-biting 21-20 victory, and Corry admitted: “I aged quite a few years at the end there.

“It was one of those tough ones that you couldn’t bear to watch. Having said that, it was tremendous guts from the players to hold on.

“We made some mistakes, but in terms of determination and courage, it was 10 out of 10 from our guys.”

Heineken Man of the match Ben Kay added: “You can see how much it means to the fans and the players with our reaction at the end of the game. It means a hell of a lot and we put our bodies on the line.”