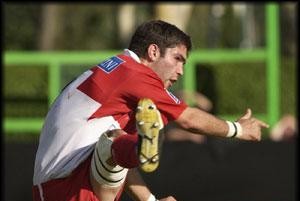 Pool rivals Biarritz Olympique and Northampton Saints go head-to-head again in their Heineken Cup quarter-final in San Sebastian on Sunday with Dimitri Yachvili quick to play down the French club’s 2-0 record over the Saints earlier in the tournament.

Northampton Saints qualified for the quarter-finals as the second best runner-up and, with Biarritz going through with a competition record 29 points as the No 1 seeds, it has put them on another collision course across the Spanish border at Estadio Anoeta.

Biarritz are played three won three in front of their Basque supporters and the winners on Sunday will have a home country semi-final against the winners of the London Wasps against Leinster quarter-final.

“Obviously the statistics look to be in our favour going into this match,” said international scrum half Dimitri Yachvili.

“However, while we are very wary of falling into any trap of complacency, I would obviously rather have won two than lost two in the Pool stages but we are under no illusions.

“I know that Northampton beat Leicester a couple of weeks ago in the English league and that they have been getting games during the Six Nations.

“At the same time our players have been resting and, although the rest is great in the longer term, it is hard to get back into games straight away so they will be in more of a rhythm than we are at the moment.

“Although a few of our players were able to play a part in the French victory in the Six Nations it certainly won’t change anything in the way we approach this game.

“As soon as we returned to Biarritz we were straight back into the club mentality and focussed on this game. We can’t afford to be distracted and, in any case, having lost to the English in the Six Nations, this is an opportunity for a bit of revenge!”

Biarritz have beaten Munster, Sale Sharks and Bath Rugby in knock-out matches in San Sebastian in the last two tournaments and are out to make it four from four.

“Anoeta is still magic for us,” said Yachvili. “Although we have now played there three times there is still a great excitement for everyone involved.

“The supporters have been going crazy with their preparations for the big day and we love the opportunity to play for the Basque country. It is an exceptional experience and we are intending to do everything we can to keep our unbeaten record.

“But Northampton are a tough team and there are so many areas where they are strong. They have a great back row who are very physical and put the half backs under a lot of pressure.

“And then they have Carlos Spencer at No 10, a player who makes so few mistakes and is great at making the right decision in a split second, while Bruce Reihana is very dangerous in the back line.

“Northampton are a very strong team with relatively few weaknesses but we will do our best to exploit the few they have.”