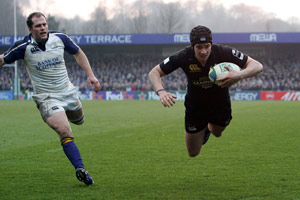 Captain Lawrence Dallaglio said his side’s “pedigree” came to the fore as London Wasps marched into the Heineken Cup semi-finals.

Wasps ran away with an impressive 35-13 victory over Leinster on Saturday, and Dallaglio  paid tribute to his team-mates.
He said: “It was a very good performance.

“We’ve got pedigree in this comp and we knew what we needed to do. We haven’t played together for a while because of the Six Nations and we came together well.”

Referring to his time in the sin-bin – during which Wasps scored two tries – Dallaglio said: “Usually you struggle with a guy in the sinbin, but the guys really responded in a difficult situation.

“Leinster are a team with flair and class, and we recognised that. We went through the phases, but credit to Leinster – they made us work hard.”

And the England veteran isn’t getting carried away just yet: “There are some quality sides left in the competition. We’re happy to be in the last four – and we’ll enjoy this performance – but we’ve got an almighty job ahead of us.”

Man of the match Simon Shaw said: “We started well and had an early grip on the game.

“It’s difficult when the forwards have been away with the Six Nations teams – especially at the lineout – but we did well.

“Our game’s always been based on solid defence, and we showed that again today. We put pressure on them throughout.”

Leinster fly-half Felipe Contepomi admitted: “We were well beaten. There’s nothing more you can say about it.

“They were spot on in what they wanted to do, and they did it. We didn’t perform in the second half. Wasps have world-class players all over the place, and we missed too many first-up tackles.”