Munster will bounce back vows O’Gara 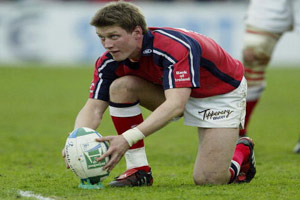 Ronan O'Gara says Munster will bounce back after their Heineken Cup defeat to Llanelli Scarlets - 05/04/2007 13:50

Munster will bounce back stronger or players should not be wearing the jersey, said a disappointed captain Ronan O’Gara after the defending champions went out of this year’s Heineken Cup.

They were beat 24-15 by Llanelli Scarlets, but O’Gara said they have to learn from that defeat – inflicted just a few miles down the road from the Millennium Stadium where Munster lifted the Heineken Cup last season.

.. “We saw one side of this competition last May and another tonight and we have to learn from this and the character of all the boys in the room is to come back stronger – otherwise they should not be wearing a Munster jersey,” said O’Gara.

“In fairness to all the boys there is a great hunger there and willingness to win, we show that, but we dug a very big hole for ourselves and tried to get out but could not manage it – that is what happens against an unstructured side like Llanelli who turned us over and scored at the other end.

“We kept going all the way but were always second fiddle tonight. Llanelli deserve a lot of credit, they are a good team and played with an intensity and hunger we could not match.

“I was impressed with them but not surprised by them. It will only sink in over the next few days, disappointed personally and for all the lads. It is a smashing competition, one of the best in the world.

“Of course Llanelli can go on to win it.  They are well capable with quality players all round the pitch and played tonight with a lack of fear so I wish then all the best.”