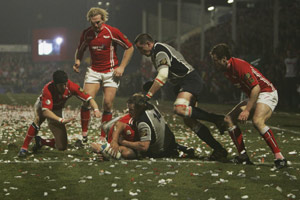 Munster coach Declan Kidney admitted his team were second best after their European crown was knocked off by Llanelli Scarlets at Stradey Park. - 31/03/2007 13:28

Munster coach Declan Kidney admitted his team were second best after their European crown was knocked off by Llanelli Scarlets at Stradey Park.

The defending Heineken Cup champions were knocked out by the Welsh region 24-15 in the quarter-finals however Kidney could have few complaints about the final result after Munster came off second best to Llanelli in almost every department.

Kidney said: “It’s never nice to lose, especially in the Heineken Cup, but we always said we would hold our hands up if we were beaten by a better side and we were here at Stradey Park.

“We’re obviously bitterly disappointed with many aspects of our performance but this is not the right time to start going over them with a group of men who have given so much.

“But we should not detract from Llanelli’s performance. They were very sharp, kept the ball alive very well after they made the line breaks and put us under a lot of pressure through the phases. They got an early score in the first few minutes and we struggled to get back.”

Munster were left with a mountain to climb at half-time after going 17-0 down before the break and Kidney admitted his team left their response far too late.

“At half-time we knew we were in a hole but that has happened and what was important was what happened next. We had to start from scratch and getting the next points was important but Llanelli held us out for a while and then we were always running out of time,” said Kidney.