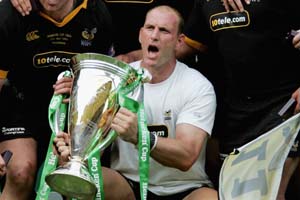 Lawrence Dallaglio will lead London Wasps out at their Adams Park fortress on Saturday anxious to take another giant stride towards a second Heineken Cup final.

The 2004 champions of Europe face Leinster with former England captain Dallaglio just happy to be at home.

“Our home form has been outstanding this year – we have the best home record in the league – and that is why we went for the win in Castres in the last round of Pool matches.

“You need a little bit of luck to win the Heineken Cup, much as you do in the Champions League, and psychologically being at home is a real positive for us.

“But Leinster are an absolute quality side, it is just amazing that we haven’t played each other in the Heineken Cup before. They have aspirations of going all the way – they have been unlucky on a few occasions – and we want to repeat our success of 2004.

“They have international players all over the pitch, they are packed full of superstars and players who are bang in form. It is going to be a very exciting game.

“And it’s not a question of bridging a 10-12 week gap because everyone talks about the Heineken Cup being on a par with international rugby and so many of the players will have been in action in the Six Nations two weeks earlier.

“The prize that is at stake gives everyone a huge incentive and with a carrot like a Heineken Cup semi-final in front of you, there is no gap to bridge.

“All these games are worthy of being a final in their own right and it is a game that all the players are looking forward to. There is a real buzz around the club and whichever team wins this game will gather momentum to go on and do good things.”

And Shaun Edwards, the Wasps head coach, believes the attacking flair of the Leinster backs will be the biggest threat.

“I don’t think anyone has really shackled the Leinster backs in the tournament to date – or in the Six Nations,” he said. “It’s probably the biggest test of our defence since we met Toulouse in the Heineken Cup final in 2004.

“Our defence is a little bit different to most and it can be a bit aggressive so we know that we have to be on our mettle against possibly the most potent back line in the world.

“Leinster also have a strong pack but if we executive our game plan well and play to our potential we will be in there with a strong chance.

“The Heineken Cup is a competition that is held in the highest esteem at Wasps. It has really grated with me seeing other sides running out in quarter-finals and semi-finals in the last few years.