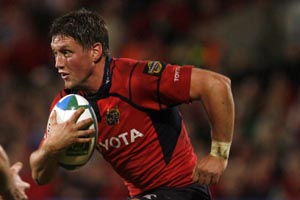 Munster's Ronan O'Gara knows that the win over Llanelli Scarlets means his side's European season is still very much alive - 09/12/2007 16:08

Downbeat Ronan O’Gara was forced to admit his side had been outgunned by a hungry Scarlets side in their Heineken Cup quarter-final at Stradey Park.


And O’Gara acknowledged Munster were well and truly beaten on the day.

“They had a real intensity to their game and had a hunger we couldn’t match,” he admitted.

“We tried hard but were poor tonight, we made mistakes and turned over the ball at crucial timer

“We weren’t as sharp as we should have been,” he said ruefully.

“The greatest thing about this Munster team is that we win together and we lose together. We will reassesses and come back stronger.”