Scarlets home in on Munster test 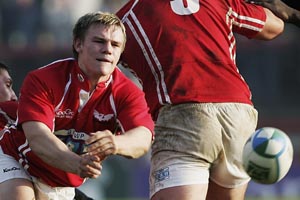 Dwayne Peel knows all about the agony of losing a home Heineken Cup quarter-final and is hoping it is going to be third time lucky for him and the Scarlets when they entertain defending champions Munster at Stradey Park on Friday night.

The Wales and Lions scrum half played in the 26-19 home defeat to Perpignan in 2003 and in the 27-10 reverse at Stradey against Biarritz Olympique the following season. But with a perfect six out of six wins in their Pool campaign, Peel is hoping that winning ways will continue when the Scarlets return to the Heineken Cup knock-out stages.

“We have had some disappointments in Europe in recent years, but those defeats will only spur us on to better things. The way we are viewing it is that we have the first of three European finals to play, starting on Friday,” said Peel, who started all six Pool games and scored tries in each of the final two matches.

“It’s a big ask for us to reach a first Heineken Cup final, but it’s something we are definitely up for. It would be a fantastic honour to reach a Heineken Cup final with the Scarlets, a team I’ve followed since I was a little boy. To reach the final and win the title would be a dream come true and right up there with anything I’ve achieved.

“We’ve had a good campaign so far, and played some good rugby along the way, and it would be a shame to let all that good work slip away now.

“We’ve put ourselves in a great position to push on, although we realise Munster is a huge challenge. They are the reigning champions – but we will be at home at Stradey Park.

“There is no better place to play than Stradey on a packed European night and it’s an occasion that we will all relish. It’s one we will be up for mentally and physically.

“The Pool stages seem a fair way off now, but the players have been working very hard since we qualified. There were gaps between the rounds and there is still a great hunger in the bellies of the players – I’ve been looking forward to this game ever since the last round.

“Come European time we seem to click and we all know that things will need to go well for us on the day if we are to beat Munster. We will have to bring our best game of the season to Stradey on Friday night.

“After going away to places like Ulster, Toulouse and London Irish and getting maximum points in the Pool stages we know what we are capable of. But it is going to be a massively intense game.

“Our pack has been outstanding in the competition this year. They destroyed the Ulster pack at Ravenhill and I think they will do a great job for us on the night.”

Although it will be the first time the two sides have met in the Heineken Cup, they have been regular rivals in the Magners League since 2002. The Scarlets have won the last four meetings at Stradey Park, including a 25-12 victory on 5 November this season, while Munster’s last triumph was in the 2002/03 campaign, 20-13.

Peel has played little or no part in the nine games to date in the League and Celtic Cup clashes – Munster beat the Scarlets 27-16 in the 2005 Celtic Cup Final at Lansdowne Road – but is looking forward to crossing swords with his international rival Peter Stringer once again.

“I’ve played against Peter quite a few times and he is certainly playing well this season. With Ronan O’Gara, he is one of the mainstays of the Irish side and they are the pair that make Munster tick,” said Peel.