Live Audio with ercrugby.com and RTE 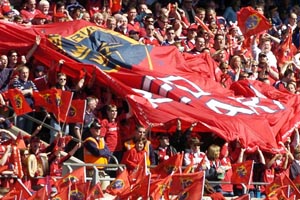 Defending champions Munster, without Paul O’Connell, face a difficult assignment away to Llanelli Scarlets in Stradey Park on Friday night which kick-offs at 7.30pm.

The match will be featured on “Friday Sportsnight” on RTE Radio 1 567MW and LW252 from 7pm and is also available here on www.ercrugby.com and www.rte.ie/sport.

Leinster’s quarter-final against London Wasps on Saturday at 5.45pm will be broadcast during RTE’s “Saturday Sport” on 567mw and LW252, and will be available here on www.ercrugby.com and www.rte.ie/sport.

Over 3,000 Leinster supporters are expected to make the trip to Adams Park to cheer on their side as they bid to win an away quarter-final for the second year in a row.

Michael Corcoran will be joined by former International and Leinster prop Emmett Byrne.