Cheika: No chance of O’Driscoll playing 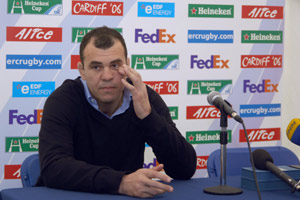 Ahead of the quarter-finals Leinster coach Micheal Cheika speaks about Brian O’Driscoll, the Wasps challenge, and the impact of the travelling supporters.


With 45 Heineken Cup caps and 100 points in Europe’s premier club rugby competition, O’Driscoll’s influence for the knock-out match against Wasps this weekend will behind the scenes.

“There’s no chance of Brian (O’Driscoll) playing but his role as off-field captain will not go un-noticed. His experience will be invaluable” said Cheika.

“Generally, we seem to be alright. Stephen Keogh has had a bit of a rib problem and didn’t train on Tuesday, but he should be fine. We’re only really missing Brian, Ronan (McCormack) and Cillian Willis.”

“The challenge is to try to transfer the long-term scouting and preparation because this is a battle that we’ve been looking forward to for quite a while.

“Wasps are a very determined outfit who will try to strangle you in defence and attack with equal intensity. They’ve very much led by Ibanez who is a real spear-head for them (in attack).

“They have great experience in the competition and the Heineken Cup format is one that suits them because they know how to keep the ball and keep the ball away from you.

“Shaun Edwards is a very smart football coach. He’ll try to out-think us as well as out-play us, I’ve no doubt.”

“It’s great for us that we will have so many of them over in Adams Park. Over a quarter of the ground will be in blue and white and in away treks the vocal nature of their support is like having an extra man.

“I remember how in Bath, Brian stopped the team in front of the Leinster fans and it really boosted the lads. The crowds are getting bigger and bigger and we want to thank them for their support.”

The London Wasps V Leinster quarter-final kicks-off at 17:45pm in Adams Park and will be shown live on Sky Sports and Canal + will delayed coverage on RTE.