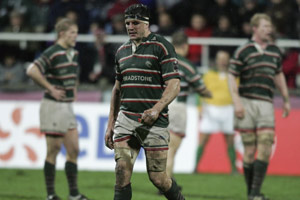 Martin Corry is wining his battle to be fit to captain Leicester Tigers in their Heineken Cup quarter-final against Stade Francais Paris at Welford road on Sunday. - 28/03/2007 13:06

Martin Corry is wining his battle to be fit to captain Leicester Tigers in their Heineken Cup quarter-final against Stade Francais Paris at Welford road on Sunday.


“Martin Corry has a real chance, we will give him all the way up to Friday’s team announcement deadline before making a decision,” said head coach Pat Howard.

“The medics have done a fantastic job and although it is not a yes, yet, it is looking much more promising.

“This is a massive knock out game and we know we are in for a fantastic challenge.

“We had to produce a magnificent effort to beat Stade last year and they have won here before -it’ll be tow very good teams playing against each other.

“You will know after the first 20 minutes who has got the right attitude and the team who turns up with the greater enthusiasm will win the day.

“The Heineken Cup as it stands today is a great competition – it is the very best of the best and anyone who wins it should be very proud of that achievement.”