Dempsey: We can fulfil our ambitions 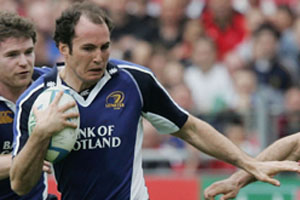 Leinster full back Girvan Dempsey wants his team mates to take a leaf out of Heineken Cup quarter-final rivals London Wasps’ book as they head to the business end of the season.

Sitting pretty at the top of the Magners League, Leinster are into the knock-out phase in Europe for the fifth time in six seasons – and hoping to go all the way thsi time after two heartbreaking semi-final defeats on home turf.

Wasps won the Heineken Cup in 2004, a season after winning the European Challenge Cup, and have picked up two English Premiership titles and the Anglo-Welsh Cup in the past four years. That’s the kind of success and consistency Dempsey would like to see Leinster bringing into their game.

“Wasps know what it takes to win in big competitions and that is something we can learn from them,” said Dempsey.

“We showed last year that we are capable of playing well on the road and we will have to be at our very best again to win at Adams Park. We have to do our homework thoroughly and understand exactly what it’s going to take to reach the semi-finals.

“It’s always good to play against the English and French clubs in the Heineken Cup because they have been the most successful nations in the tournament. It promises to be a great game and a huge occasion for the Leinster players and fans.

“In terms of intensity, in the knock-out stage of the Heineken Cup the action is at the same level as international rugby.”