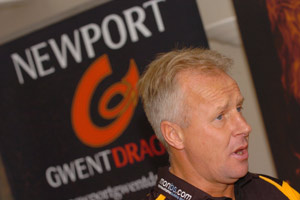 The old enemy from across the Severn Bridge have won the competition for the past six seasons.

But ahead of Friday night’s big quarter-final clash with Brive at Rodney Parade, the Newport-Gwent Dragons coach says it’s about time the powerful Guinness Premiership sides didn’t have it all their own way.

Turner said:”There have been some very good teams in this competition down the years with the likes of London Wasps, Sale Sharks and Gloucester all winning it. “But it’s about time some other side from another country took the honours because they are good enough to do so. “And I would put us in that bracket because we have shown we are match for any side on our day.

“So it would be nice to win some silverware and bring the trophy home to Wales rather it going to England once again.”

The Gwent region take on French outfit Brive in the last eight clash in confident mood having already seen off Bristol and Bayonne to top their pool. And although Turner has set his sights on reaching the Euro final in May, the former Wales fly-half says he already has one eye on next season.

“All French sides are hard to beat and Brive will be no exception to that,” he said. “They are a talented side and we are under no illusions that we are going to have to raise the bar once again to beat them.

“But I think we are ready for them as we’ve progressed as a unit and we’ve really enjoyed and prospered in this competition.

“The Dragons squad here is still too small but we are still building and this season will stand us in good stead for the future.”