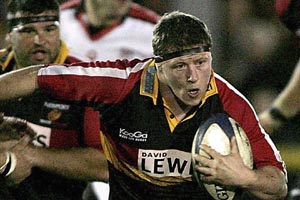 Hooker Steve Jones may take his place in the Newport Gwent Dragons team against Brive in the quarter-finals of the European Challenge Cup at Rodney Parade on Saturday (3pm). - 26/03/2007 13:24

Hooker Steve Jones may take his place in the Newport Gwent Dragons team against Brive in the quarter-finals of the European Challenge Cup at Rodney Parade on Saturday (3pm).

Jones has been sidelined with since October but with The Dragons’ situation at hooker reaching crisis level he may be drafted straight into the starting XV.


Regular choice Ben Daly aggravated a hamstring injury against Llanelli Scarlets on Friday night and forced to leave the field after only 19 minutes.

And with Daly extremely doubtful and Kieran Crawford out for the rest of the season, the only hooker sure to be available for the Brive game is Academy player Richard Wilkes, whose senior rugby is strictly limited.

If Daly fails to make it, Jones, who is just about ready to return after his shoulder operation, may well have to go straight back in without any trial run for the Dragons or any other side.

Dragons coach Paul Turner is sweating on the outcome, hoping not to have to go in with too many Academy players for such an important game.

But he also has a problem at loose head prop, where the ever-present Adam Black suffered a dead leg after just two minutes against the Scarlets, though he limped on until a few minutes into the second half when he had to go off.

And then he was replaced by another Academy player in 19-year-old Jamie Corsi, but he is a tight head.

The only other loose head specialist in the squad is David Maddocks, and he has made only one start and one replacement appearance for the Dragons this season, more recently turning out for Bedwas in the Premier Division.

At least centre Paul Emerick came through unscathed against the Scarlets after suffering shoulder trouble, while Wales lock Ian Gough, rested on Friday, will be back and centre/wing Nathan Brew should return after dropping out of the Scarlets game with a slight foot injury suffered in training last week.