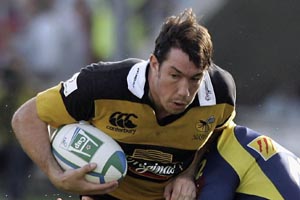 London Wasps international winger, Tom Voyce has signed a new two year contract with the club that will keep him at Adams Park until the end of 2008-9.

Voyce, who joined Heineken Cup quarter-finalists Wasps in the summer of 2003, has been the club’s top try scorer ever since, having racked up 55 tries from 123 appearances.


His Heineken Cup tally currently stands at 100 points in 34 appearances since his debut Heineken Cup season in 2000/01 playing with Bath Rugby. The wingers had a dream start with Wasps lining out  with the team that defeated Toulouse in the 2004 Heineken Cup final.

The most regular player in Wasps’ current squad, 122 of Voyce’s appearances have been starts, and until his call up to play for England in the Autumn internationals of November 2005 he had made 58 consecutive starts, breaking Jamie Noon’s record of 56.

On signing his new contract Voyce said, “I’m really pleased to be staying at Wasps for another two years, and I’m excited about what those two years will hold for me and the club.

“Wasps made me an international player and I have greatly enjoyed and benefited from working closely with coaches like Ian McGeechan, Shaun Edwards and Warren Gatland and amongst a squad of quality players.

“I won the vast majority of my international caps whilst playing at Wasps, and as I still have a huge aspiration to play for my country again in the future, I believe that Wasps is the best place I can be if I am going to work on my game and challenge again for international honours.

“With the raft of young players who are coming through at the top level, added to the experienced players and quality signings we have made recently, the next few seasons promise to be an exciting time at Wasps and I think there are a lot of trophies still left in this team.”

Voyce and the 2004 Heineken Cup champions Wasps have the opportunity to repeat history this season as the final returns to Twickenham Stadium on Sunday 20 May.