Thumbs down for O’Connell 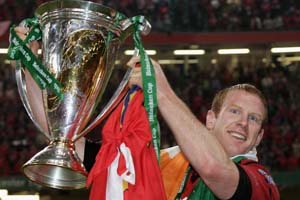 Munster’s captain Paul O’Connell has been ruled out of the quarter-final clash against Llanelli Scarlets in Stradey Park on Friday 30 March.

The 27-year-old broke a thumb in the game against Scotland last weekend and will miss the last weekend of the RBS Six Nations when Ireland take on Italy in Rome.

He has had a pin inserted and has been ruled out for four or five weeks which means he will not be available to Munster for the Heineken Cup quarter-final.


The leader of the pack, who took over the captaincy role from Anthony Foley this season, has started in all of Munster’s Pool games this season.

With 37 Heineken Cup appearances to his credit, O’Connell’s experience and influence on the pitch will be missed by Munster.