Purdy moves from Wasps to Bath 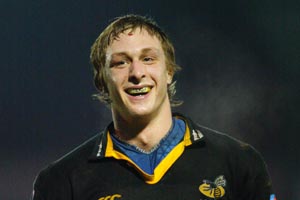 London Wasps lock Martin Purdy has signed a one-year deal with Bath Rugby. Purdy’s departure, by mutual consent, comes after seven years with the club for the former England U21 second row.

“I’ve been at Wasp since leaving school, and since then I’ve had a fantastic time at the club,” said the 25-year-old lock.


“There have been some tough times, particularly with injury, and I’d like to thank everyone at the club for sticking with me and for the support and encouragement they have showed me, especially during those times.

Purdy has made 37 Premiership appearances for Wasps since his debut in 2003, and 8 in the Heineken Cup, so has plenty to offer Bath. Purdy played a crucial role in the Wasps squad in 2004 that lifted the Heineken Cup in Twickenham, appearing in 7 of the 9 Wasps games in the tournament that season.

Purdy, who will join Bath at the end of the season, is very pleased to be coming to Bath, particularly with England international second-rowers Steve Borthwick and Danny Grewcock at the club: “I’m very excited,” Purdy said. “Next year is World Cup year so hopefully I will play a decent amount of rugby if those two are selected for England, and so be able to challenge for a place when they are back.”It is also good that I will be coming to a club where they spend a lot of time on the lineout, which will improve my own game and give me the chance to make a wider impression.”

Moving from London to the West Country is also very appealing: “Every time I’ve been to Bath it’s been pouring with rain!” Purdy said. “But the weather in the west is supposed to be good and to be honest I like the idea of coming to beautiful city like Bath to play rugby.”