From Edinburgh to Gloucester 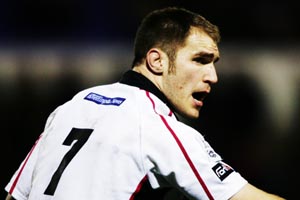 Alasdair Dickinson and Alasdair Strokosch have signed one-year deals with Gloucester and will join up with their new team-mates in the summer. - 12/03/2007 12:20

Alasdair Dickinson and Alasdair Strokosch have signed one-year deals with Gloucester and will join up with their new team-mates in the summer.

Strokosch, a 6ft 3in flanker, won his first senior international call-up for Scotland against Australia in the autumn internationals, and was this week added to the training squad for Saturday’s Six Nations encounter with Ireland.


The 24-year-old has featured in all six of Edinburgh’s Heineken Cup Pool games this season, and scored a try against Gloucester in Murrayfield.

“I had really good discussions with their coaching staff and was impressed by the facilities and the positive feeling at the place – I’m certain that moving to Gloucester will be good for my game,” said Strokosch.

Meanwhile Dickinson, 23, a dynamic prop who favours the loosehead side, has been capped by Scotland at every level up to A-international.

“I know from first-hand experience how strong a Gloucester forward pack can be, and it will be a real challenge to force my way into contention next season,” Dickinson said.

“Once I spoke to the coaches I was in no doubt that if I want to reach the highest levels then Gloucester offers the tough environment that can help me to achieve my goals.”

Gloucester’s head coach Dean Ryan added: “We are careful who we want to attract but feel both of these players will add tremendously to the pool of talent we already have available.

“They played against us in the Heineken Cup this season and impressed us greatly. We are attempting to build a young, talented and competitive squad, and both of these players typify what we are looking for.

“The timing is now right for both the club and the players to release this information.”