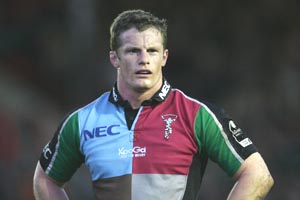 Double European Challenge Cup winner Mel Deane has become the latest player to return to Connacht as the Irish province continue to strengthen their side ahead of next season. - 08/03/2007 10:02

Double European Challenge Cup winner Mel Deane has become the latest player to return to Connacht as the Irish province continue to strengthen their side ahead of next season.

The 32 year old, who left Connacht seven seasons ago for Sale Sharks, has been signed on a two-year deal from NEC Harlequins.


Harlequins centre Deane, who has 36 European club rugby caps to his credit including 7 Heineken Cup caps, lifted the European Challenge Cup with Sale Sharks in 2002 and again with Harlequins in 2004.

This signing follows the confirmation that Deane’s Harlequins colleague Gavin Duffy and Wasps’ flanker Johnny O’Connor will also join the Irish side.

Deane, whose family ties are in Longford, spent a season with Connacht before following coach Glenn Ross to Sale Sharks.

Connacht CEO Gerry Kelly said that the return of O’Connor, Duffy and now Deane, was a huge boost to the province.

“We are delighted to have the players back as we continue to strengthen our side. All of them are quality players and all are vastly experienced.

“Invariably, in professional sport there will always be comings and goings and it is great that three such talented players have decided to return.

“We hope to be able to announce a number of other signings in the next few weeks as we continue to build a very strong side for next season,’ said Kelly.