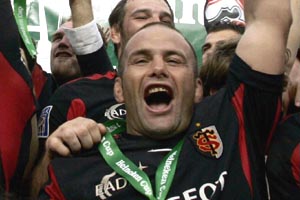 Toulouse’s double Heineken Cup winner Yannick Bru announced that he will retire from rugby at the end of the 2006/07 season.

The former French international captained Toulouse in his 64th and last Heineken Cup match on Sunday 21 January in Stade Ernest Wallon in the Round 6 game against Ulster.

The 34 year-old began his European club rugby career with Colomiers, scoring a try against SU Agen in the 1998 European Challenge Cup final, helping his side to a 43-5 victory, and earning his first European rugby medal.

“As captain of Toulouse and the France team, Yannick knew how to gain the trust of his team-mates,” said Toulouse coach Guy Noves.

“He has decided to retire after having advised club president Rene Bouscatel and myself.

“He has always put his intelligence and availability at the service of others. Yannick can be assured of the respect of the entire club because he’s accepted by all around him.”