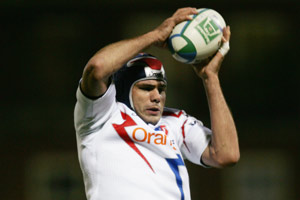 Hot on the heels of the news that prop Sylvain Marconnet is going to be out for four months after breaking his leg in two places while skiing at the weekend, skipper and second row David Auradou has been ruled out for three months after crushing his shoulder after slipping on some ice.

Auradou was with the rest of his Stade team mates in Tignes last week and sustained his injury when he slipped on ice after leaving a restaurant. He underwent an operation on his right shoulder this week.

To add to Galthie’s difficulties, French international hooker Dimitri Szarzewski is facing up to a three month break after undergoing surgery on his damaged shoulder. The operation was aimed at getting him to return sooner, rather than later, but his recuperation is set to be longer than at first hoped.

Last weekend also saw the Parisian side’s Argentinean prop Rodrigo Roncero pick up a broken rib in the Pumas’ clash with the French Barbarians in Biarritz. He faces a race against time to be fit for the quarter-final match at Welford Road.