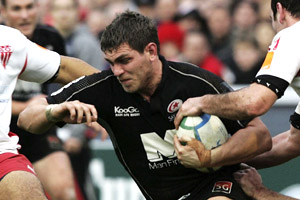 Heineken Cup quarter-finalists Northampton Saints have announced another addition to their squad with the signing of Saracens centre Ben Johnston. - 28/02/2007 10:40

Heineken Cup quarter-finalists Northampton Saints have announced another addition to their squad with the signing of Saracens centre Ben Johnston.

The 28-year-old centre has signed a three-year deal which will begin next season.


Johnston has been at Vicarage Road since 1998 after signing to Saracens from Waterloo and has racked up 178 appearances during that time, including 22 European Challenge Cup appearances and 13 Heineken Cup caps.

He played the first 10 games of the current season with Saracens before he underwent surgery on a groin injury which continues to rule him out of first team action.

Saracens Director of Rugby Alan Gaffney said: “Ben has taken a decision based on what he feels is best for his rugby career and his family and we have to respect that. He had a strong start to the season with us but the surgery in early November on a long-standing injury has meant he’s been ruled out of action since then. He is still working on his rehabilitation and we hope to see him back in action in the middle of next month.”

Saints head coach Paul Grayson said: “We have been hit hard with injuries in the centres leaving David Quinlan to fight on alone for almost two seasons. Ben  is physical, quick and can play at 12, 13 or on the wing. He provides excellent strength in depth in all these positions.”

Johnston said: “It was a pretty tough decision, as I have been at Saracens so long, and it was certainly not one I could make overnight. But now I have made that decision I am looking forward to establishing myself at Northampton.”