Ben Gissing on the move to Edinburgh 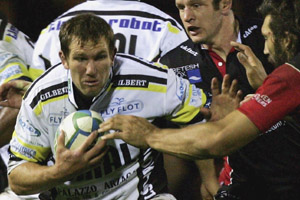 Edinburgh Rugby Ltd has strengthened the squad for next season by signing New Zealand-born lock Ben Gissing on a two-year deal. - 26/02/2007 15:30

Edinburgh Rugby Ltd has strengthened the squad for next season by signing New Zealand-born lock Ben Gissing on a two-year deal.

Currently with Italian club Calvisano, Gissing played for Leinster for four years, scoring ten tries in 73 matches. He previously played for Auckland in the NPC and represented Ireland A and the New Zealand Barbarians.

Speaking on joining Edinburgh, Ben Gissing said: “I’m excited about the challenge and looking forward to playing in the Magners League again, as well as being involved in the Heineken Cup.

“Having played at Leinster for four years, I have been to the city a few times. It’s a great place and my wife and I are looking forward to bringing up our baby there.”

Head coach Lynn Howells said: “Ben is a lineout specialist and an athlete and can cover both the second and back rows. At two metres tall and weighing 120 kgs, he brings a physical presence to the squad. When he’s faced teams I’ve coached in the past, he’s always caused me problems with his aggressiveness, lineout ability and physicality at the breakdown area.”

Executive Chairman Alex Carruthers added: “We are delighted that Ben will be joining us next season. A player of his stature and experience will add the required steel to the Edinburgh pack.

“We are continuing to finalise our squad for next season and we shall announce further signings in due course.”

Edinburgh has announced a change in its senior squad coaching team. Lynn Howells will now assume responsibility for forward coaching in addition to the overall management of the squad. Rob Moffat will continue to be responsible for coaching the backs while Massimo Cuttitta will continue to provide specialist scrummaging support on a regular basis.

Iain Paxton, who has been forwards coach since the beginning of the season will remain with the club in a redefined role concentrating on player identification, match analysis and community development.