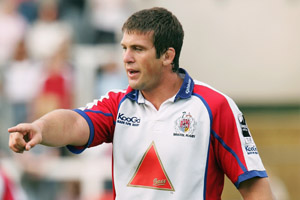 The Argentinian international lock has signed a new two year deal which will keep him at the club until the summer of 2009.


Sambu, as he has become affectionately known, joined Bristol from French club Brive for the 2005-6 season. At that point, he was relatively unknown in England but really caught the eye a few days later playing for Argentina against the British Lions in Cardiff when the Pumas stunned the rugby world by deservedly earning a 25 all draw.

Sambu is confident that Bristol will maintain their current form and qualify for the Heineken Cup next season:

“We have a strong team here and are competing well and I am very much looking forward to playing in the Heineken Cup next year if we can keep performing at the level we are at now.”

He has since had to fight hard for a first team place at Bristol with the likes of Gareth Llewellyn and Roy Winters competing for the second row berths.

However, he has made real progress as a player in his time at Bristol, scoring 4 tries in 15 starts.

Sambucetti himself is now looking to the future:
“Bristol are a great club and I am delighted to sign an extension to my contract.”

“It is hard fighting for a place in the first team here but that is good, it always makes me work hard and helps me improve as a player.”