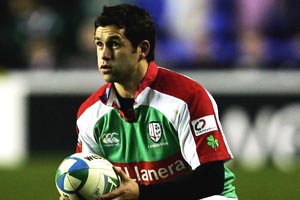 Heineken Cup quarter-finalists Northampton Saints have moved to strengthen their playing squad for next season by signing Barry Everitt from London Irish. - 19/02/2007 09:38

Heineken Cup quarter-finalists Northampton Saints have moved to strengthen their playing squad for next season by signing Barry Everitt from London Irish.

Everitt, a prolific goal-kicker has signed a three-year deal with Saints. The fly-half has amassed 1,725 points from 164 appearances for London Irish – a club record.


The 30-year-old joined London Irish after playing provincial rugby for both Munster and Leinster. He has a total of 18 Heineken Cup and 18 European Challenge Cup caps to his credit and has scored 389 points in the European competitions.

Everitt said: “I see this an opportunity to develop my game under a head coach like Paul Grayson, who I have a lot of respect for having played against him many times and I can completely appreciate his extensive knowledge of the game,

“However, it was not until I came here and spoke with the management and players like David Quinlan that the club really appeared to be just as I had expected. Northampton is also a club that is steeped in history, is a past Heineken Cup winner, has been a major force in Europe for many years and has the best facilities I have seen in the Premiership.

Head coach Paul Grayson said today: “Barry is a proven performer over a number of years and has great experience in the Premiership. His kicking game obviously stands out as exceptional, however he is a very capable footballer and distributor and there is a lot more he has to offer. I am looking forward to working with him to express his full range of talents.”