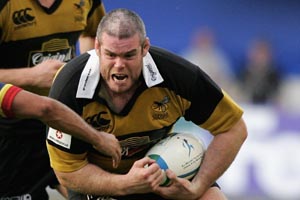 Bristol Rugby have increased their front row options for next season with the signings of Irish props Peter Bracken and Ray Hogan from London Wasps and Connacht respectively. - 14/02/2007 11:46

Bristol Rugby have increased their front row options for next season with the signings of Irish props Peter Bracken and Ray Hogan from London Wasps and Connacht respectively.

The rebuilding process at Bristol has been underway for some time now with several new arrivals for the 2007-8 season already announced and it’s the front row that has now been strengthened. Bracken will boost the resources at the tight head position whilst Hogan will do likewise on the loose head.


Bracken joined London Wasps from Connacht for the 2005-6 season, played in the Powergen Cup final and won a call up to the Ireland squad that toured Australia and New Zealand. He is already capped at A level and has played for the Barbarians.

Hogan joined Connacht in 2003 and is also an Ireland A international having been capped 6 times. A regular in an often underrated Connacht side, he will bring real physical presence to the loose head and featured in Ireland’s 2006 Churchill Cup squad.

“What Peter and Ray will bring to the table is experience and know how. Both have played European Rugby for several seasons now and both have played representative rugby. They’re both approaching their peak and can play a big role for us.”

Bracken, who came off the bench for Ireland A against England Saxons said:

“”They are a very progressive club and it gives me an opportunity to further my career.”

Hogan added: “I am really looking forward to moving to Bristol. I was very impressed by the set-up when I went over there, and it will be good to link up with Bracks again.”

Hill also announced the departure of hookers Saul Nelson and Neil Clark. With three hookers now contracted for next season and beyond in addition to the Academy’s Ryan Prosser, Bristol made the decision to release Nelson and Clark.

They both leave with immediate effect which will hopefully give them the chance to sort themselves out with new clubs well in advance of next season.