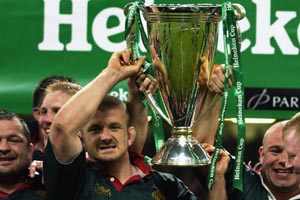 Double Heineken Cup winner and Leicester Tigers veteran Graham Rowntree has retired from rugby union after 17 years in the game. - 13/02/2007 16:45

Double Heineken Cup winner and Leicester Tigers veteran Graham Rowntree has retired from rugby union after 17 years in the game.

During his time there, the combative forward helped the Tigers to four consecutive Premiership titles, as well as two Heineken Cup successes in 2001 and 2002.


The 35-year-old has played a total of 59 Heineken Cup games between 1996 and 2006, and is currently the 11th most capped player in the Heineken Cup. The ERC Elite award winner played his last Heineken Cup match in the 2006 semi-finals when Bath defeated Tigers 12-15.

At international level, Rowntree earned a total of 54 caps after debuting against Scotland in 1995, as well as participating in two Lions tours – although he never got a Test cap.

A loyal servant to club and country, Rowntree was a big part of Sir Clive Woodward’s squad in the build-up to the 2003 World Cup, playing in all of the 2002 Six Nations matches, although he eventually missed the cut.

“I have had incredible good fortune in being involved with this club for so long, to have won some great things and with some incredible players,” Rowntree told Leicester Tigers’ official website.

“I would not change a single thing in my time here.

“Rugby at Leicester is my life and has been my life for a long time. Leicester Tigers is in my blood. I could not imagine going to play for any other club.”

Head coach Pat Howard added: “Graham has been a great servant to the club over the years and playing in Sunday’s game was a great way to celebrate the career of a fantastic player for Leicester and England.

“His loyalty to the club has been immense. He loves Leicester and the club loves him.”