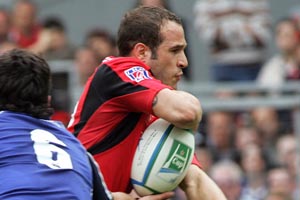 Toulouse fly-half Frederic Michalak and double Heineken Cup winner has signed a one-year contract to play for the Natal Sharks in South Africa after this year’s World Cup.

The 24-year-old Toulouse playmaker will make an official announcement on his transfer at a press conference in Paris later on Friday, Sud Radio reported on Friday.


Michalak is generally regarded as France coach Bernard Laporte’s first choice in the number 10 shirt but has been out of action since undergoing a knee operation in November and did not feature in any of the Heineken Cup Pool games this season.

He is not expected to return to action until mid-March at the earliest and will miss the entire Six Nations campaign.

Sud Radio said that Michalak, who has played 42 times for France, would join his new side after the World Cup if he is selected in the squad by Laporte and during July if he is not.

Michalak has 27 Heineken Cup caps to his credit with Toulouse. He won his first Heineken Cup cap in 2001 and since then has scored 133 points in Europe’s premier rugby competition. He was on the Toulouse side that lifted the Heineken Cup in 2003 and again in 2005.