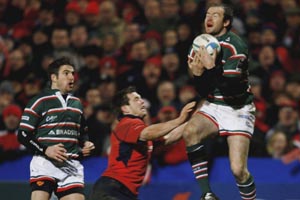 The Irish team for this weekends Six Nations game against France includes players from five of the eight Heineken Cup quarter-finalists teams. - 09/02/2007 14:15

The Irish team for this weekends Six Nations game against France includes players from five of the eight Heineken Cup quarter-finalists teams.

All eight Heineken Cup quarter-finalists will be represented in the international teams in this weekends RBS Six Nations.

Eddie O’Sullivans Irish team includes 15 players from quarter-finalists Leicester (1), Leinster (4), Llanelli Scarlets (1), Munster (8), and Wasps (1). Eoin Redden, Wasps, will take his place on the bench this week as Issac Boss takes to the field in place of injured Peter Stringer.

Reigning Six Nations champions France travel to Croke Park this weekend to take on Ireland in the inaugrual international rugby game in the historic 82,300 capacity stadium.

Seven players from the Leicester Tigers are named in the England (5), Ireland (1) and Scotland (1) teams.

English captain Vickery, will line out with Wasps team mates Lewsey,  Worsley, Palmer and Rees. While another Wasps player Ibanez will lead out the French team against Ireland.