Edinburgh signings for next season 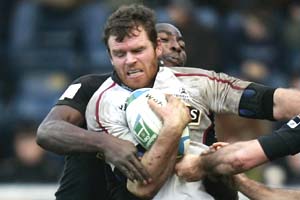 Edinburgh Rugby have today boosted their squad for next season by securing the services of two of their stars and recruiting a new player. - 08/02/2007 09:53

Edinburgh Rugby have today boosted their squad for next season by securing the services of two of their stars and recruiting a new player.

Duncan Hodge has signed a new one-year contract, which includes him continuing to take responsibility as kicking coach. The stand-off, who has 26 Scotland caps, captained Edinburgh to their six-try victory over Connacht in their last Magners League match at the end of January.


Matt Mustchin, who has been a regular feature in the playing squad since moving from Ulster at the start of 2005/06, has pledged his future to the club by signing a new two-year deal.

He said: “I’m really happy to re-sign with Edinburgh. I wanted to stay as my family are really settled here and glad to be involved with the club moving forward.”

Duncan Hodge said: “I’m delighted to have signed for another year. I’ve enjoyed being back with the club and hopefully I will be able to contribute to a successful season.”

Ian Nimmo will join Edinburgh next season on a one-year deal. The former Scotland under 21 lock is currently on loan to Coventry from Leicester Tigers.

Speaking on his move, Nimmo said: “I am happy that Edinburgh have given me the opportunity to come back home and play rugby. I am keen to prove myself and am looking forward to working hard and hope that I will be able to push for selection.”

Head coach Lynn Howells said: “It is good to have three players on board who will carry us through the World Cup period. Both Duncan and Matt have shown their commitment to Edinburgh this season and their experience will be invaluable in what will be a difficult period during the World Cup next season. Ian will be a welcome addition to Edinburgh squad and will provide much needed height and bulk to the pack.”

Edinburgh Rugby’s Executive Chairman Alex Carruthers said: “Bringing in Ian to the squad further demonstrates Edinburgh Rugby’s commitment to developing the best of young Scottish talent. Duncan and Matt’s re-signing is recognition of the service we’ve had from these players in the current season and we’ll be looking to augment these signings in the near future.”