Quarter-finalists impress in the Six Nations 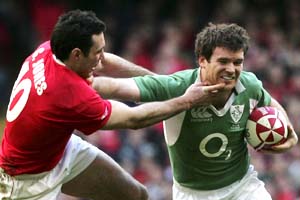 The opening three matches of the RBS Six Nations produced some intriguing battles as well as some unfortunate injuries for the Heineken Cup quarter-finalsists. - 07/02/2007 09:29

The opening three matches of the RBS Six Nations produced some intriguing battles as well as some unfortunate injuries for the Heineken Cup quarter-finalsists.

Llanelli Scarlets flanker Simon Easterby and Munster’s Denis Leamy were rampaging for Ireland in the open, and also making it more difficult for Wales to secure possession at the break down. Once Ronan O’Gara built up his confidence he was both strong in attack and defensive compared to that of the unusually quiet game of Llanelli Scarlet’s Stephen Jones for which Kidney will be delighted, what with the Heineken Cup quarter-final contest against Llanelli Scarlets in the coming months.

Of concern to Heineken Cup champions Munster is the hairline fracture in Peter Stringer’s hand. This and the performance of the Irish scrumhalf would be of real worry to Munster coach, Declan Kidney compared to that of the sniping Llanelli Scarlet’s scrumhalf Dwayne Peel, who was close to being named Man of the Match. This honour went to D’Arcy, for which Michael Cheika will be pleased and will be hoping that he can maintain his form through to the quarter-finals against Wasps in the Heineken Cup.

Leinster’s central pairing Gordon D’Arcy and Brian O’Driscoll, both sustained injuried during Ireland’s opening game against Wales. However, since the weekend D’Arcy has been cleared to play and O’Driscoll has until Saturday to prove his fitness before he will be able to lead his country out in Croke Park on Sunday.

The Leinster camp were keeping a close eye on there Heineken Cup quarter-final opponents over the weekend in the form of Wasps’ Phil Vickery, Joe Worsley and Josh Lewsey, who all put in an impressive performance for England. Vickery lead his team up front, followed closely by Worsley who was massively influential at the break down. Worsley however, is recovering from a neck injury he sustained over the weekend so will miss the next match. Wasp’s hooker, Raphael Ibanez had a powerful game against the Italians, especially when he hacked the ball on for Christophe Dominici to score under the posts.

Encouraging for Leicester Tigers was Geordan Murphy’s short spell on the pitch for Ireland. He came on  as a  blood substitute for Denis Hickie, in the short time he was on he made a massive contribution, he sent up a high ball, chased it, caught it and went on to set up a try for O’Driscoll in the right corner.

Also in action for Leicester were Louis Deacon, George Chuter and Martin Corry against Scotland in Twickenham on Saturday. With confidence building in the English Camp, Wasp’s and Leicester could be hard to dispose of come the quarter-finals of the Heineken Cup.

Italy were defeated by France in Rome. The Stade Francais players played well especially the influential David Skrela at fly-half. Also encouraging for their young team mate, Lionel Beauxis, was his introduction which saw him slot over a penalty.

Northampton will be glad to see the lack lustre performance by experienced flanker Serge Betsen. However his Biarritz team mate Jerome Thion shined, especially for his work that lead to Cedric Heymans scoring in the corner. However, he may miss this weekend’s match due to a light injury to his ankle.

With England playing Italy this weekend, Ireland taking on France in Croke Park and Scotland hosting Wales, it will be interesting to see if the Heineken Cup players can make an impact on their rivals before they meet them in a few weeks time in the quarter-finals.