Warwick on the move to Munster 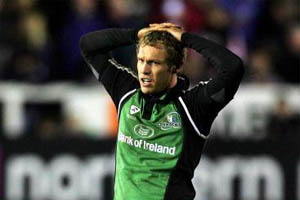 Connacht fly-half Paul Warwick is to join Heineken Cup Champions Munster at the end of the season.

The 26 year old has made 65 appearances for Connacht since joining them from Manly in 2004 on a one-year deal.


His haul of 97 points made him the top scorer in the European Challenge Cup in his first season and led to a two-year contract extension.

A former Australian U-21, his appearances for the Aussie sevens side, which he captained, have ruled him ineligible to play for Ireland.

Warwick has been Connacht’s top scorer for the past few seasons, with 239 points in 46 Magners League games and 157 points in 19 appearances in the European Challenge Cup.

Connacht CEO Gerry Kelly said he was disappointed that Warwick was moving to Munster.

“He was very much part of our plans going forward, as he has been central to our side since we brought him over from Australia almost three years ago.

“We wish him well in his career but we are disappointed that he is leaving Connacht at this stage,” said Kelly.