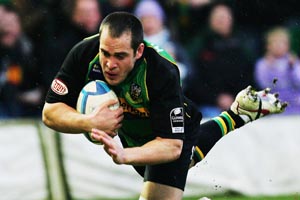 Ulster Rugby are set to confirm that former Northampton Saints flanker Sam Harding will join the club on a short-term contract until the end of the season. - 01/02/2007 10:57

Ulster Rugby are set to confirm that former Northampton Saints flanker Sam Harding will join the club on a short-term contract until the end of the season.

With Neil McMillan currently unavailable with a broken thumb and David Pollock involved in the Ireland U20 side as captain for their Six Nations campaign, Harding will be brought into the Ulster squad as back row cover.


New Zealander Harding, who has one All-Black cap won against Fiji in 2002 at the age of just 21,  joined Northampton Saints in late September 2005 and played 32 games for the club following his try-scoring debut against Worcester in the 2005-06 season. Prior to playing for the Saints, Harding played for the Highlanders and the Canterbury Crusaders in the then Super 12, as well as being involved in with NPC sides Canterbury and Otago.

Ulster Rugby Chief Executive Michael Reid said; “We are extremely lucky, at short notice, to be able to sign a player of Sam’s experience, intelligence and physicality. Mark McCall has no doubt that he will prove an exciting and dynamic addition to the back row.”

Paul Grayson, Harding former coach at Northampton spoke well of the player  “Sam Harding is a fine rugby player and he has performed well in his time at Saints, he leaves Northampton with our best wishes for his future both in the game and beyond.”

Harding was born in Australia and is the great-nephew of former Wales and British Lions captain Rowe Harding, who toured South Africa with the British Isles in 1924.