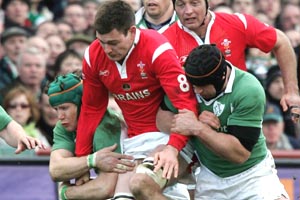 With just under two months until the quarter-finals kick off can the result of the Six Nations Championship have an effect on the Heineken Cup? - 01/02/2007 09:44

With just under two months until the quarter-finals kick off can the result of the Six Nations Championship have an effect on the Heineken Cup?

With teams from England, France, Ireland and Wales all represented in the last eight of this competition their result will have to factor into their games at the end of March.

Some of the biggest talents from this year’s Heineken Cup, who will once more be gracing our fields in their club colours, are going to have a huge impact on the upcoming Six Nations Championship. This weekend we will see Ireland take on Wales in Cardiff with the half back combinations of Stephen Jones and Dwayne Peel facing Ronan O’Gara and Peter Stringer also clashing in the opening match of the quarter-finals between Llanelli Scarlets and Munster. Also with six of the Irish pack hailing from Munster some might say this will be a warm up for the Heineken Cup. In contrast the Llanelli Scarlets captain, Simon Easterby will be running out in Irish colours, once again coming up against his team mates.

On February 11, Ireland will be taking on France which will see the captains of both countries battling it out, but who will also be meeting in the quarter-finals in Adams Park. Raphael Ibanez, reigning from Wasps will be hoping to overcome Brian O’Driscoll and his Leinster team mates in Croke Park. We will also have many of the Biarritz and Stade Français players togging out in this match, and both could be potential opponents of Leinster if they can overcome Wasps. With the key men of Biarritz such as Serge Betsen, Imanol Harinordoquy and Dimitri Yachvili in the French squad, this will truly be a big encounter for the Leinster men.

When England visit Ireland the line out will be very similar to that of the final encounter in Thomond Park between Munster and Leicester in Round 6 of the Heineken Cup. The English squad is littered with five of the furious Leicester pack that out muscled them last month and in particular Louis Deacon and Julian White. As a result, this match could have huge consequences if Munster can beat Llanelli Scarlets and then could potentially meet Leicester in their fortress in Welford Road.

On this same Six Nations weekend the Stade de France will light up for the encounter between France and Wales. This will be a huge fight as we see Jones’ men take on many of their potential Semi Finalists of Christophe Dominici and his Stade Français colleagues.

When England clash with France in Twickenham we will catch a glimpse of many of the players that will battle it out for one of the four precious places in the semi-finals in the Heineken Cup. In particular, Martin Corry and his Leicester team mates will be seeking a huge performance as they will be playing Stade Français in the quarter-finals. Also Northampton’s Hooker Steve Thompson who is out of this year’s Six Nations due to a neck injury will be keeping a keen eye on this match as his club will be meeting last year’s finalists Biarritz in the quarter-finals.

While the coaches and management of this year’s last eight are preparing for their quarter-final clashes their international representatives will be looking to get one up on their upcoming Heineken Cup opponents – some intriguing battles to savour.