Biarritz men on a mission – Traille 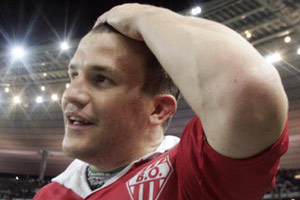 After losing last season’s final to Munster at the Millennium Stadium, Traille says it is the target of the Biarritz players, club, region and the whole Basque country to put their name on the list of clubs who have lifted the Heineken Cup.

..Their hopes of getting to the Twickenham 2007 final were improved by the semi-finals draw. Having already earned a home tie against Northampton in the quarter-finals, they were handed another home draw in the semis against either London Wasps or Leinster.

Having beaten Northampton home and away in the pool stages, few would bet against that meaning successive games in the Estadio Anoeta in San Sebastian, the Basque region of Northern Spain.

“It is definitely the objective of the club this year to do better in the Heineken Cup than last year, after losing in the final to Munster,” admitted the France outside half or centre.

“It is very difficult to lose a final, particularly in the European Cup. It was difficult to come to terms with.

“We are well aware that last year we failed in a massive task and that is what we want to achieve this season.

“We have been French champions two years in a row and it has become an objective for the players, the club, the entire region and the Basque country that we need to win the Heineken Cup.”