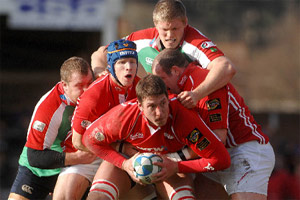 Scarlets skills coach Robert Jones says they have the pack to compete with the best, as long as they keep the focus which earned impressive victories in Toulouse and Ulster…

He believes those performances show the Scarlets will be favourites at home to Munster at the quarter-final stages, but will need to repeat their best form to justify the tag.

“Munster are a huge, huge ask for us. They have got something about them in Europe. They will be coming down to Stradey, probably not as favourites and the pressure will be on us to do a job. If we can do a job on them as we did at Toulouse and Ulster, in the manner that we did it as well, then we have every chance of going through,” said the former Wales captain.

The Scarlets back line has earned rave reviews on their way to six out of six wins in the pool stages, but pundits such as former England coach Dick Best have questioned whether the Stradey Park pack is strong enough to win the competition.

Jones says the answer is there for all to see from the performances at the homes of two former Heineken Cup winners.  “The Ulster performance showed that if we are focussed, we do have a pack to compete in Europe against the better sides. Leicester and Munster have shown that you do have to have a steely edge up front to compete and we need that,” admitted Jones.

“We have shown it on occasions this season, we showed it in Ulster when we needed it. It is just a question of getting that pack consistency leading up the Munster game and beyond.

“Should we overcome the Munster hurdle then we will be confident about going to other countries and venues because we have been there and done it both at Toulouse and Ulster who are previous winners. We have got to take some confidence from that.”

Jones knows that it does not come much tougher than facing the defending champions in the quarter-finals, but he is delighted the club have decided to play the game at their Stradey Park home rather than cashing in by going to a bigger venue for the game.

“Home advantage has been something which we have worked for and now we have got and I think it would be slightly diluted if we went to any other venue, be it the Millennium Stadium or the Liberty Stadium,” said Jones.

“Financially of course it has been well documented the position the club are in, but moving forward to the semi-final and possibly the final is going to be more financially advantageous to the club. I think the decision to stay at Stradey was right.

“We are delighted with the performances so far and the six wins, but a quarter-final against the current holders who have played exceptionally well in the competition since it started is going to be a big, big ask of us.

“But it is at Stradey Park in front of home support, a ground that of course we are familiar with so we have every advantage in ensuring we can progress in this tournament.

“Unfortunately we cannot play the semi-final in Wales should we progress. It is hard to get our head round anything other than the Munster semi-final, but we have shown great form – probably better form than at home.”