Keogh focused on the big prize 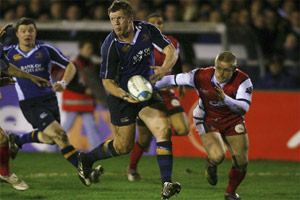 Leinster will leave no stone unturned in their bid to win on the road and reach the Heineken cup semi-finals, according to flanker Stephen Keogh…

Having lost their final group game in Gloucester, the Dublin side face a trip to another top English team with London Wasps standing in their way.

..Keogh knows it will be a tough task, but as Leinster went to Toulouse and won in the quarter-finals last year they still believe they have a good chance of progressing in this season’s tournament.

“We are so committed to do well in this competition that we will not leave any stone unturned, we will work really, really hard to get the win in the quarter-final,” said flanker Keogh.

“We sat down at the start of the season and we wanted to be in the last eight and top our pool – we have not go a home quarter-final but we are not going to be too downbeat about it.

“We are going to go on the road now with a lot of enthusiasm and see if we can get into the semi-final.

“We are disappointed with the way we performed in the second half at Gloucester, now we have got to win it tough – we do not make things easy for ourselves.

“Some guys will be going into internationals camp now and some will be staying at Leinster. There is a lot of hard work to be done and we just have to get our heads down.”