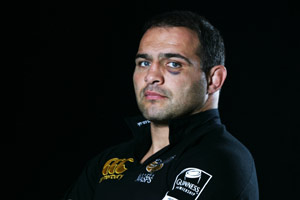 London Wasps front row heavyweight Rapheal Ibanez will go all out to help direct his side to the Heineken Cup final - 19/04/2007 13:14

The veteran front row – so often a top performer at the highest level  – was instrumental as Wasps held on in France in the face of intense pressure as the clock ticked down.

“Today we didn’t try to force the pace of match,” he said.

“We were patient and composed and it is that kind of experience that counts at this level.”

Ibanez caught the eye with a 30 yard dash midway through the second half, and did the dirty work on the ground to help see his side through.

“”We were focused on what we had to achieve today,” he said.

“We had to stay strong in front of the goal line, and it was really important for us to defend at the end.

“The way we played shows the team spirit at the club at the moment.”

The 2004 Heineken Cup winners are campaigning on three fronts at the moment, with ambitions of silverware in both the Guinness Premiership and EDF Energy cup.

And now they have a home Heineken quarter-final to look forward to.

“It will be great for our fans, it has been a long time since we qualified for the quarter-finals and we know it will be a tough battle” said the smiling Ibanez.