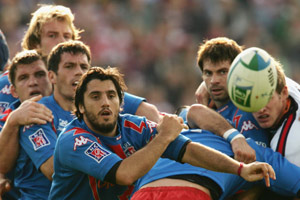 Stade Francais Paris scrum half Agustin Pichot says his side are still on course to reach their ultimate goal of winning the Heineken Cup... - 14/01/2007 18:31

Twice beaten finalists – the last time in extra-time by Toulouse in Edinburgh in 2005 – Stade have put themselves in sight of winning Pool 3 despite failing to win either of their last two matches.

Yet last gasp penalties in the 12-6 defeat at Sale and last weekend’s 22-22 draw against the Ospreys have taken them to the top of the Pool and within a win over Rugby Calvisano at Stade Jean Bouin this weekend of reaching the quarter-finals for the seventh time in eight seasons in the tournament.

“After the draw at the Ospreys we know we will have to roll up our sleeves and try harder – we want to win the Heineken Cup and we are going to do everything we can to do that,” said Argentine ace Pichot.

“We have won the French Championship titles a number of times, but the Heineken Cup is what we want most of all.