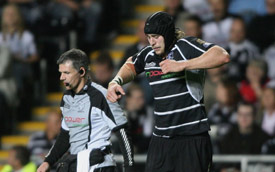 Ospreys back row Ryan Jones insists he's looking to make up for lost time by helping his side qualify for the final eight of the Heineken Cup. - 02/01/2008 10:17

The Wales and Lions ace was voted Heineken Man-of-the-Match for his storming performance, but saw his calculated gamble at the death fall foul.


“It was me who gave away the penalty I simply didn’t think he would make it from there,” admitted Jones.

“But he did and I had to go into the dressing room afterwards and say sorry.

“Stade are seasoned performers in the Heineken Cup and they really did a job on us in the first half.

“We regrouped in the second half because it dawned on us that it was still all to play for.

“We are pretty disappointed not to have won the game and we need to carry on where we left off in the second half when we go to Sale next weekend.”

“We were well up for the game and we wanted to start at 100 miles an hour. We didn’t, they did and they shocked us,” said Williams.

“The feeling was flat in the first half and we didn’t play anything that resembled rugby.

“It took us until the second half to start playing and, in the end, we’re disappointed not to have done.