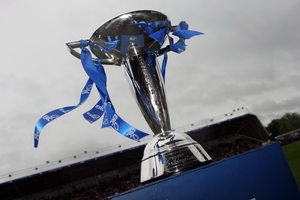 Clermont’s 35-22 win guarantees them top spot in Pool 5, with Worcester needing a big win at Viadana next Saturday to have a chance of sneaking in to the quarter-finals as one of the three best runners-up.


The Warriors were awful in the opening quarter, conceding 20 points in as many minutes before backrower Drew Hickey livened up the Sixways crowd with a good try.

Things kicked off minutes before the halftime whistle, with Clermont forwards Thibaut Privat and Michel Dieude both shown yellow cards for professional fouls. The pressure on the six remaining forwards proved too much and Worcester were awarded a penalty try to trail only 25-17 at the break.

Clermont fly-half Brock James edged his side further ahead with his fifth goal of the afternoon, and the Warriors’ hopes of a comeback ended when skipper Pat Sanderson was sent to the bin for killing the ball.

Glasgow are still in the quarter-final mix after cruising to a 47-17 bonus-point victory at Italian side GRAN Parma.

Glasgow romped to a 42-3 lead after only 50 minutes, but went off the boil to give the Italian fans the chance to cheer converted tries to back-rower Julio Alcacer and fly-half Rima Wakarua, before Glasgow full-back Sean Marsden bagged his side’s sixth and final try.

Unbeaten Pool 2 leaders Saracens host Narbonne tomorrow (SUN), but will need to beat Glasgow at Hughenden next Friday night to guarantee a berth in the final eight.