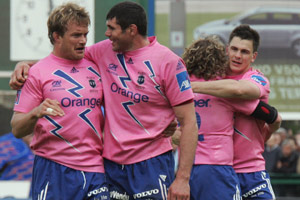 Mike James is a major figure in the cosmopolitan and star-studded Stade Francais Paris team – and the Canadian international lock is relishing the challenge facing the Parisian team when they travel to the Ospreys for the crucial Pool 3 match at the Liberty Stadium on Sunday afternoon.

The Ospreys beat Stade 13-8 in Swansea last season and, despite the Ospreys losing 27-14 in Paris in Round 2, James is adamant the Welsh regional side is an even more potent force this season.

“The Ospreys are a much improved side from even last year and we will certainly have to be cautious when we go to Wales,” said James.

“I was on the bench for that first game but after we had watched the tape of the game it was obvious they are now a vastly better side than they were 12 months ago and they have certainly earned our respect.

“As far as I can make out, all the Welsh sides are improving and the Ospreys are really well organized and professional in everything they do on the pitch.

“Perhaps we did not expect them to be as solid as they were and they certainly have a number of quality players and a strong line-out.

“Now we know that if we want to qualify for the quarter-finals then we are going to have to win in Wales and we know that will be anything but an easy task.

“But as professional sportsmen what a great situation to be in – a do-or-die situation like this in the Heineken Cup certainly stimulates the heart.

“People are talking about the losing bonus point we picked up at Sale in Round 4 but we will only find out if that has been important or not – and comes into the equation – over the next two weekends when we have massive games against the Ospreys and then with Sale coming to Paris six days later.”

Stade Francais and the Ospreys have three wins apiece but the French club top the Pool by an extra bonus point with Sale Sharks far from out of it and capable of stirring things up with games to come against Rugby Calvisano and Stade.

“The first rule of French rugby is to win your home games. Then if you lose away from home, out comes that old adage that French teams do not travel well.

“During this Heineken Cup we have seen Toulouse go down at Ulster and Llanelli and we certainly did not travel well when we went to Manchester in the last round.

“We are pretty ambitious in our plans to play attacking rugby but we also have to be able to adapt to the conditions on the day and we tried to throw the ball around too much against Sale in what were dreadful conditions.

“However, we are top of the Top 14 table and still in the hunt for a Heineken Cup quarter-final place and a lot of that has to be down to the great pre-season we had with a proper training camp and match.

“Toulouse and Brive are the only French clubs to have won the Heineken Cup so if we could go all the way it would be fantastic recognition for our club and our president, Max Guazzini. He has done so much for rugby in Paris, and France in general, that it would be great for us to win something this year.

“We have failed to do that for the last two seasons so we are looking to change that over the next few months.”